Not many years ago, the parents of a child diagnosed with leukemia would likely be told to make the most of their short time together. The interval from playground to cemetery was as little as 90 days. Today, thanks to advanced therapies, those parents might be told to start saving for college.

Put aside for a moment the priceless gift that survival is to the family. Consider only the cold economic fact that the child will grow up and contribute to the national economy in myriad ways through decades of employment. Not a bad return on the investment in basic science that made lifesaving drugs for leukemia and many other diseases possible.

Friday morning in Washington, a town not known these days for widespread consensus, a remarkable gathering of leaders begins a weekend of events devoted to a single proposition: Science matters. The senior leadership of the U.S. Senate and House (from both parties) is joining more than 1,000 scientists, medical researchers, university presidents, Nobel laureates, corporate CEOs, cabinet secretaries, philanthropists, presidential advisers and patient advocates. “A Celebration of Science” will do more than honor the past. Participants will be developing specific nonpartisan proposals designed to help strengthen future American science. 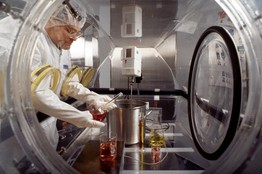 Unfortunately, the government doesn’t always see the full benefit in funding science. No matter how wondrous the drug, no matter how many lives it saves, enhances, lengthens or makes more productive, the development costs supported by federal grants fall only into the expense column when scored by the Office of Management and Budget or the Congressional Budget Office.

Yet scientific breakthroughs, combined with public-health advances, underlie what is arguably the greatest accomplishment in human history: World-wide average life expectancy has more than doubled since 1900. This has fostered major social benefits and economic growth in this country and many others. Consider East Asia, where life expectancy went to about 70 from 39 over the past half century. As Eli Lilly CEO John Lechleiter told this newspaper last year, that might go a long way toward explaining the Asian economic boom.

The United States science ecosystem—defined by collaborations among public agencies, for-profit companies, nonprofit organizations and academic research centers—still leads the world and provides benefits to every nation. But there’s no guarantee that will always be the case. Science magazine reported earlier this year that China already surpasses us in gene-sequencing capacity. Meanwhile, a 2012 National Research Council report said that American research universities “face critical threats and challenges that may seriously erode their quality.” These include financial pressures and increased international competition—two of many concerns behind this weekend’s science initiative.

Much of the work over the next three days will focus on the biological sciences and their capacity to deal with major global issues. In addition to addressing the enormous human and economic toll of disease, the biological sciences also promise to help solve many seemingly intractable global issues—lack of access to abundant food and clean water, the defense against pandemics and bioterrorism, reliable energy supplies and environmental sustainability. Each of these issues profoundly affects economic growth.

Can we afford to invest in bioscience? Don’t we have a budget crisis that’s about to drive us off a fiscal cliff? We do, and we must deal with that through the political process. But there is an important role for government in fostering basic science, which not only saves lives but also improves quality of life. Bioscience in particular provides sustained long-term benefits through job creation, increased productivity, lower health-care costs, longer working lives, process efficiencies and cheaper energy.

When government budget officials view the National Institutes of Health as a $31 billion cost, they don’t count the net benefit. Others do. Research by University of Chicago economists Kevin Murphy and Robert Topel, for instance, indicates that improvements in health from 1970 to 2000—many of them driven by NIH grants—add a whopping $3.2 trillion a year to U.S. national wealth.

Here’s one example: If the incidence of AIDS had continued to grow at the rate of 1980s cases, the majority of hospital beds would have been filled with HIV-positive patients within a decade. According to former NIH Director Elias Zerhouni, the cumulative cost would have exceeded $1.4 trillion. Instead, $10 billion of federally funded research helped turn a certain death sentence into a manageable disease.

Here’s another: From 1950 to 2004, the cumulative budget of the National Cancer Institute (in 2004 dollars) was about $116 billion. In 2004, cancer mortality fell by 2%. Messrs. Murphy and Topel had earlier estimated that a 2% reduction in cancer deaths is worth nearly $1 trillion to the national economy in productive lives saved, which is more than eight times the entire NCI budget for 55 years.

Having made this substantial investment in bioscience, the American people should reap its benefits. Let’s not put the brakes on this engine of job creation and progress.

Just in my lifetime, federally supported research has helped eradicate polio and smallpox, nearly eliminated death from some cancers, and greatly reduced the burden of, and early death from, heart disease. The next decade promises even greater breakthroughs. Now that we’ve begun unlocking the secrets of the human genome, medical researchers have led us to the era of precision medicine—therapies customized to treat you, not your disease.

It may be easier to comprehend these benefits in terms of a single family. You’ve probably never heard of the Beery twins—Alexis and Noah—who were mistakenly diagnosed with cerebral palsy at age two and during the next 12 years suffered a range of almost-fatal symptoms that often left them unable to engage in childhood activities. The remarkable story since then of these now-athletic California teenagers shows how rapidly medical technology has developed with help from federal grants.

Although the original sequencing of the human genome took 13 years and cost $3 billion, genome mapping now takes only a few hours and the cost is rapidly heading toward $1,000. Last year, a team at the Baylor College of Medicine sequenced the Beery family genome and found a rare-but-treatable genetic defect. The twins, now diagnosed with a disorder called dopa-responsive dystonia, aren’t yet cured, but with treatment they no longer face imminent death and live near-normal lives.

Those breakthroughs are part of America’s No. 1 source of growth—basic, translational and clinical science. And the benefits don’t stop at the border. The advances emerging from American laboratories are some of our best ambassadors throughout the world. Their impact is greater than all the foreign aid we’ve ever dispensed.

This is our choice: Invest now to extend the nation’s past achievements, or pass the economic and social burdens of disease to the next generation. It’s time to reaffirm our commitment.

Mr. Milken is chairman of FasterCures, the Milken Institute center for accelerating medical solutions and a host of this weekend’s conference.

A version of this article appeared September 7, 2012, on page A15 in the U.S. edition of The Wall Street Journal, with the headline: Investing in Science, Reaping Rewards.